BERLIN, Germany — Almost 70 years after the end of World War II, Germany has unveiled a memorial to the up to half-a-million Roma and related Sinti people murdered by the Nazis.

The memorial, a dark, circular pool of water with a triangular plinth in the center — where a fresh flower will be placed every day — stands in the capital’s Tiergarten park near the Reichstag.

Chancellor Angela Merkel and President Joachim Gauck joined politicians and representatives of the Roma and Sinti communities, as well as 100 elderly Holocaust survivors for the unveiling ceremony.

However, representatives of the Roma and Sinti — a related people who live mostly in German-speaking Central Europe — say the memorial should also serve as a warning about ongoing discrimination across the continent today. END_OF_DOCUMENT_TOKEN_TO_BE_REPLACED

Filed under Arts and Culture

It Takes a Village: A Roma Community Fights Against the Odds

By Siobhán Dowling in Alsószentmárton, Hungary

The village of Alsószentmárton is at the very margins of Europe, one of the last places in Hungary before the Croation border. And all its people are Roma, among the most marginalized in the EU. But a church-run project there aims to break the cycle of social exclusion and educational disadvantage.

There are no shops, cafes or other small businesses in Alsószentmárton. One of the few things that stands out from the rows of one-story, shabby houses, is the imposing white church at the entrance to the village. Children play and cycle their bikes on the streets and young women, not much older, push strollers and call out greetings to one another.

Alsószentmárton is a small village in southwestern Hungary and all of its residents are Roma, Europe’s most marginalized people. Living here on the very edge of the European Union, right up against the border with Croatia, the villagers are fighting the affects of decades of social exclusion and disadvantage. A project run by the local Catholic priest is attempting to tackle that poverty and to address one of the Roma population’s biggest handicaps: the lack of access to a decent education.

Father József Lánko, a huge burly man with a white beard, wears a brown woolly jumper. The 55-year-old has been in the village for 30 years and has seen firsthand the ravages caused by the economic turmoil that followed the end of communism. “Earlier everyone had a job, the people in this village were in construction or road building,” he explains. “They had a minimum salary, but it was certain that every month they would have money, so they lived in security.” With the fall of the Iron Curtain, from one day to the next, they lost everything.

“The people live like beggars now,” Lánko says. “It is against human dignity, it would be much better if they could take care of their own families by working.”

Lánko says the unemployment here fluctuates. It is 90 percent most of the year, but drops to 60 percent during the wine harvest season — the village is located near Hungary’s famous Wine Road — when the people are employed in the local vineyards. “There is little here in winter, the families have nothing to eat, then we help for a few days, give them something so they don’t have to starve,” he says. END_OF_DOCUMENT_TOKEN_TO_BE_REPLACED

The Right Wing and the Roma: EU Presidency a Test for Tolerance in Hungary

By Siobhán Dowling in Budapest, Hungary

Hungary will assume the six-month rotating presidency of the European Union in January and the government is pledging to forge a policy for addressing the Roma in all of Europe. But the country has its own troubling history with the Roma, who have been deeply impoverished and pushed to the margins of society since the fall of the Iron Curtain.

Csaba Csorba is standing in scrubland beside the burned-out shell of a small house. He points to the spot amid the tall grass where he found his son Robert bleeding in the snow almost two years ago. Nearby lay the body of his four-year-old grandson Robi. The small boy had been shot through the head, his face was unrecognizable.

The murders of Feb. 23, 2009 saw the Hungarian village of Tatárszentgyörgy become synonymous with hate, hatred towards Europe’s Roma people. Robert Csorba, a 27-year-old father of three, had gathered up his young son in his arms and ran out to escape the flames that engulfed his house, the last one on the edge of the village. Unknown assailants had attacked under the cover of night, throwing Molotov cocktails at the door and then opening fire when those inside tried to flee. Robert was shot in the lungs and lived for another hour, dying on the way to the hospital. His six-year-old daughter Bianka was injured but survived, while his wife Renata and younger son escaped the blaze. END_OF_DOCUMENT_TOKEN_TO_BE_REPLACED

A Fight for Memory: Monument Honors Sinti Boxer Murdered by the Nazis 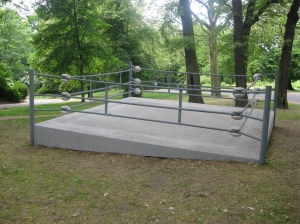 Johann Trollmann was a young boxing star when the Nazis came to power. The highpoint of his career should have been winning the light-heavyweight title in June 1933. But Trollmann was a Sinti and he was soon stripped of his title. Before long, he would fall victim to the Nazi genocide.

It seems an odd place for a boxing ring — nestled beneath a canopy of trees in a quiet corner of Viktoria Park in Berlin’s Kreuzberg district. The structure is made of concrete, its base slopes steeply in one direction and a dozen concrete spherical objects resembling boxing gloves cling to the ropes. But what’s it doing here?

Nearby, a plaque bearing a photograph of a handsome young man in boxing gloves clears up any confusion. The ring amid the trees is a temporary memorial dedicated to Johann Trollmann, a boxer who was stripped of his light-heavyweight title by the Nazis in 1933 after winning a fight just a stone’s throw away on Fidicin Strasse. There was no place for a champion like Trollmann in the Third Reich — he was a Sinti. And like half a million other Roma and Sinti, he would fall victim to the Nazis’ racial policy of annihilation, dying in a concentration camp in 1944. END_OF_DOCUMENT_TOKEN_TO_BE_REPLACED